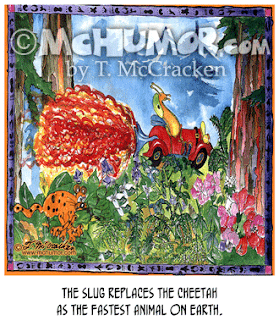 I can't believe I've been writing this blog for almost a week and no one has asked me about my fascination with slugs mating. Apparently sex only sells so far. Would a web page titled "The Mating Life of the Ariolimax columbianus" get any hits? Oh well. It's my blog, so here goes.

A common rule in nature is that if it’s smaller than you, eat it; if it’s bigger than you,you run from it; and if it’s the same size as you,you mate with it. That in part explains the behavior of a sea slug, a nudibranch (Navanax inermis) that will try to eat each other, and if they fail at that, they mate. Imagine the after mating conversation. One lights a cigarette, inhales deeply and says: “Hope you didn’t take my trying to eat you personally."

The most common slug around here is the banana slug, Ariolimax columbianus. It's closely related to Ariolimax dolichophallus which translates to a slug with a big--how shall I put this--a big Male Organ, an MO for short, an MO that can swell to lengths longer than their body. They’re also related Ariolimax californicus brachyphallus which translates to a slug from California with a small MO. Take that California!

Speaking of large MOs, a starling’s sex organs weight 1,500 times as much during mating season as they do the rest of the year.

But I digress. Back to the mating habits of slugs. Slugs take their time doing just about everything, even mating. They take hours to mate, sometimes days. Before you start to get jealous, I should mention that they get so into the act that to uncouple they sometimes need to gnaw off their large MOs. Their large MOs? As in both of them have MOs? Yeah. They're hermaphrodites (i.e. they have both sex organs). Good thing, otherwise you can imagine the couple counseling they'd need after one of them gnawed off the other's MO.

Maybe sometime I'll write about why it takes a minimum of three whales to mate.

Dearest T,
It is a great pleasure for me to be the first to comment on this exceedingly exciting and, indeed, controversial subject of gastropodic reproduction. In fact, I would never have dreamed of consulting you on this awesome and yet mucus-maligned topic had it not been for my darling mother-in-law Jeanne, who, during what I would assume to be a very 'senior moment', suggested that I should review the blog of one of her friends whom I had probably never met. You and I never met? What on earth was she thinking? How often have I hugged you on the sidewalk in Florence, refilled your Tanqueray-and-Tonic glass at family functions and kickstarted that old red-and-silver station wagon of yours? Good Lord, I even have a signed copy of one of your many publications!
T, I just love your humo(u)r and albeit cynical outlook on life that speaks to the Brit in me.
So, I'm off for a 'slug' of something strong to help the remains of a pizza 'slime', sorry, slide down!
Keep on sluggin', gal!

P.S. when I was at school the MO was somebody who slid his fingers down your Y-fronts and asked you to cough.

I'm sure they disallow any of this in Texas (my red state home) when they find out about it. I'm pretty sure that they disallow talking about it because, really, if they KNEW about it, they'd have to be FOR evolution, y'know?

Wish I'd come across the weird, fun stuff in science. As it was I settled for being a librarian (first) and later a psychotherapist. There IS some weird stuff in those two... but not as weird as having to eat the MO to take a break for a snack.

You don't even want to know what slug librarians do in the stacks with Texan psychotherapists.

me personal i hate psychotherapists!