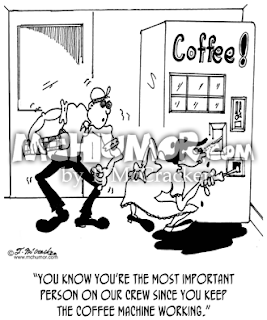 NASA's impending launch of the Space Shuttle Endeavour with Barbara Morgan, the teacher-turned-astronaut who was Christa McAuliffe's back up 20 years ago on the ill fated Challenger Shuttle, made me think about espresso. Of course, in the Pacific Northwest where knowing how to operate a commercial-cappucino maker makes you more marketable than having a degree from one of the nation's top universities, it doesn't take much to make us think about espresso.

But there's a rational reason for my current thoughts. Espresso pots, like space shuttles, have O-rings, and if they're not put together right, espresso pots, like space shuttles, blow up. I learned this when I was about 13. I went to pour my mother a cup of espresso and the instant I lifted the pot off the stove it exploded, sending shrapnel all over the kitchen, some to this day still lodged in the walls. My mother sighed, rose from the dining room table, shuffled to a cupboard, dug out another espresso pot--this one twice the size of the one before--and began over, this time making sure to put in the O-ring.

Tea pots in Britain need a certain amount of competence to operate, too. Twenty years ago I was visiting a friend in Oxford, and even though I was exhausted and jet lagged, my host spent a good while showing me how to operate her electric tea kettle before I went to bed. Heaven forbade I should wake before her and wait an instant longer than necessary for a morning fix.

In the morning, though, what I really wanted was not a cup of tea, or even espresso, but a hot bath. Alas, my friend had only mentioned the workings of the bath in passing. Consequently I took a cold bath. That's because even someone such as myself--someone who does know how to operate a commercial-cappucino maker and has a degree from one of the nation's top universities--couldn't figure out the dropping in of coins of hard-to-find denominations into even harder-to-find slots, and then figuring out the right order to manipulate the series of pulleys, levers and knobs to avoid asphyxiation or scalding. I'm not a rocket scientist.

Best of luck to all the astronauts on the Endeavour.

McHumor.com's NASA Cartoons
Posted by T- at 12:37 PM No comments: Links to this post