Technology's wonderful. Now I need not limit myself to boring friends and family with my year end letter. I can now bore complete strangers. So here goes: 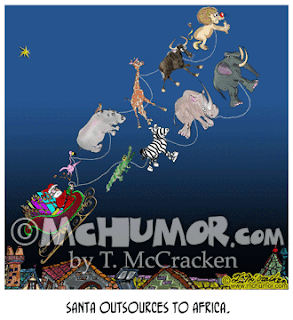 I had hoped that Wiki-Leaks would save me from writing a year-end letter by posting all the important information about my life, but so far as I can tell, I don’t rate a single mention. I guess I haven’t made enough snide remarks about world leaders.

Not that much happened to me this year … or maybe it’s that I’m getting old and can’t remember what happened. I believe I’ve entered what is euphemistically called a “woman’s change of life.” The hot flashes have really cut my heating bills and, even better, cut the frequency I have to wrangle a 40-pound bag of pellets into my pellet-stove. I swear, 40 pounds weighs a lot more today than it did 20-years ago. I think the Bureau of Weights and Measures should launch a full-scale investigation and Wiki-Leaks should post the results. I’ve also begun to wonder why people claim they’re younger than they are. I’m 53 and when I tell someone I’m 63, or better yet, 93, they say, “Wow, you’re in great shape!” I know a lot of baby boomers hate the idea of getting old, but I’m embracing my dotage and decrepitude and kind of enjoy the role of eccentric-wise-elder whose job it is to warp and mold those not yet old enough to have had their first colonoscopy.

Speaking of young people I’m working on warping, I got to see my four-year-old nephew Alex in June when we had another family reunion in France. He, my brother, Peter, and his wife, Anne, flew in from India. Alex arrived hale and hardy, but soon developed severe diarrhea and had to be hospitalized for five days. I guess there weren’t enough microbes in the Parisian water. Fortunately, medical care in France is top-notch. Most who worry about the U.S. adopting an European-like health-care system has never seen a doctor in Europe or, like myself, been denied insurance in the U.S. for pre-existing conditions and have to rely on faith-based care (i.e., praying that nothing happens to you that will bankrupt you).

Meanwhile, my adopted 10-year old-niece, Katie, spent much of the summer in a backyard pool. This may come as a surprise to those of you familiar with the climate here where two-consecutive 70° days are considered a heat wave and topless beaches are where the really frisky take off their sweatshirts. So how did Katie manage her daily dips? Solar panels and a wetsuit. She has a typical coastal Oregon tan where only her face and hands are dark. She’s young enough that she hasn’t developed a green patina from constant exposure to mold and mildew.

Cartooning has been pretty good this year. A few of my projects were ‘toons for a text-book on nano-technology (I still wouldn’t know a nano from a Big Mac), a series of ‘toons for wine coasters (wine coasters! Who needs to do draw cartoons about wine and cheese parties for the New Yorker when you can draw directly for winos?), and ‘toons for a unit on civility for the Montreal school-system (I can’t think of anything snide to say without seeming uncivil).

My dog, Sammy, and I still occasionally lead nature hikes for Elderhostel … excuse me, Road Scholar. Baby boomers are now Elderhostel age, but don’t like anything implying they may be getting old, so a name change was needed. For a brief period they called it Exploritas, thus going from a name that people hated to a name that people didn’t understand. Perhaps the powers-that-be who came up with this were boomers who found an old joint and made the decision in a drug induced haze.

I hope you and yours are well and happy.
Merry, Merry
T-