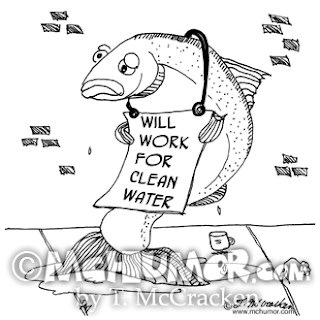 Peter, my brother, Anne, his wife and Alex, their 18 month old son are in Norway this summer so they can restock their cod liver oil supply and visit Anne's family. Norwegians are really big on cod liver oil. When Alex was six months old he'd never eaten or drunk anything but mother's milk. He'd never even had water. So what did Anne propose be his first exotic? Cod liver oil. Norwegians have one of the, if not the highest standards of living in the world, so maybe that's sufficient compensation.
Cod liver oil is supposed to be good for the brain, but I'm not sure why. It's not as though cod are known for their intellect. A fishiologist (an ichthyologist for you Latin buffs) once said that the smartest fish make the dumbest rat lost in lab mazes look like Einstein.

"Fishing. The thinking man's sport." That's what my grandfather would say as he baited my hook in the dark. My grandfather loved fishing. He'd study tide charts for hours trying to figure out when the best tide for fishing would be. Since the tide changes every six hours and 14 minutes you'd think that every now and then the best tide would be at the crack of noon, but no, it was always at four in the morning. Always! If it was drizzling, well, that meant the fishing was going to be even better. The thinking man's sport? "Just how smart are these fish?" I always wondered. We were the one's sitting in the rain at some ungodly hour. Maybe I'd have understood it better if my mother had insisted I take cod liver oil everyday of my life.