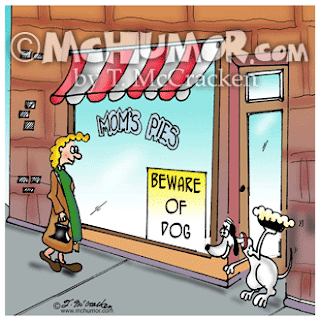 Between Michael Vick's involvement in dogfighting and yet another person in suburban Portland being mauled by a pit bull, dogs have received a lot of press recently in the Oregonian. My family is worried that my dog, Sweet Pea, will kill me. Well, not exactly kill. Just be the cause my death. It's not that she--a large dog pound mutt, a malamutt, so to speak--is a dangerous dog. She's more of a hazard than anything. Speed Bump is one of her nick names because she's always under foot. Whenever I move, she and my cat, Inky also move. Sometimes I feel like the president and the secret service. I get up from my desk and she perks up. "She's on the move," she signals to the cats. "Get ready to swarm in case she decides to go down stairs."

My family's fears aren't totally with out foundation. My uncle died due to complications from injuries he suffered after tripping over his dog. It could have been worse. She could have been his therapy dog. She was a shepherd as I recall. Maybe that's why shepherds are on various lists of "Dangerous Dogs."

Sweet Pea's best friend is my cat, Inky. Actually, I think they're more than friends, if you know what I mean. I just wish they wouldn't flaunt the fact that some in the house have a love life. At least they're both fixed (although I don't think they think they were broken before) so I don't have to worry about baby mutants, even though I'm sure they'd be cute. Also since Sweet Pea's a she and Inky's a he, folks in the Red states can't object.