What Ever Happened to Inspector van Creveld? 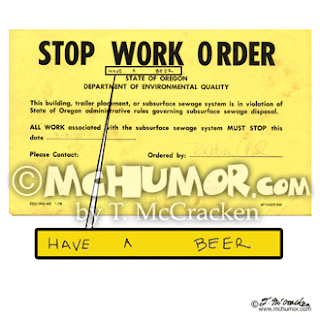 I have reached a new milestone in my cartooning career: I ticked off someone enough that he contacted an editor. "I have been a reader of Rock Products for over 30 years. I can tell you that rarely has a cartoon offended me more than the McHumor in this month’s issue. We take safety very seriously and I find this in extremely bad taste."

"Rock Products?" you ask. It's a magazine that deals with, well, what else? rock products (quarries and the like). Hey, we can't all draw cartoons for magazines with centerfolds to die for or for the New Yorker. Actually, I used to draw cartoons for the New Yorker, but they never had the good sense to buy my work, so I eventually stopped wasting postage and concentrated on selling to trade journals ... but I digress.

This is the offending cartoon. 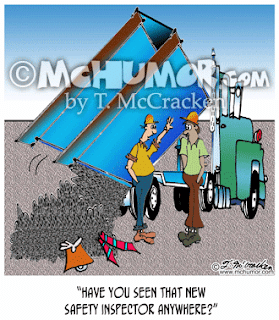 What's really funny is that it was inspired by a real life experience. My grandfather was a stonemason and when I was building my house he said that when I was ready, he would build me my hearth. I explained to him that since I was going to have a pellet stove, I didn't need a hearth. He pshawed. "No granddaughter of mine is going to have a house without a hearth."

Since I was doing much of the construction myself and funding the project as I went, it was a long time before I was ready, so long in fact, that when I finally told my grandfather I was ready he asked, "Ready for what?"
"For you to build me my hearth," I said. He snorted.
"I'm ninety-some years old. You build your own !@#$% hearth."

And that's what I did. I set up an easy chair for him and spread out on the floor the interesting rocks, agates, petrified-wood and fossils that I had collected over a lifetime, augmented with ones given to me by friends who knew of my plans. It was a slow process in that I'd lay down a row, wait a day for the mortar to set, lay down another row, and so on. When I was about three-quarters of the way through, I got home one day to find a yellow "Stop Work" order posted on my door from my septic inspector, a most dreaded development someone with a house under construction can get.

When I looked closer I saw that written below "Stop Work, was "have a beer." The inspector who'd left the order was an old friend and had left me a six pack in a mini-cooler. Still, my heart was going pitter-patter. I was also friends with his wife who, after popping open a bottle, I called. "Oh that man," she said. "What should we do for revenge?"
"Give me one of his ties," I said.

I mortared it into my hearth in and installed a plaque on the mantel that says, "Whatever happened to Inspector vanCreveld?"  He loved it and when he was training his replacement he brought him over to show his part in a very unique cartoon. 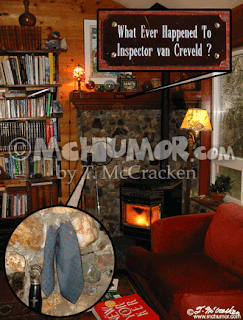